Today, I made at least 5 souls happy (and probably a thousand others on Chennai roads). I stopped using my bike (read Scooty) to work and started using company cab one way and public transport, the other. As I boarded the cab this morning, it was interesting to note the conversation between my co-workers. We passed Park Sheraton; the driver pointed at a car parked inside the huge hotel complex and said that's the Lamborghini they saw last week and it's always parked here at Sheraton. I craned my neck to get a view but couldn't see anything but a few Honda Citys. And we zipped ahead in a matter of nano seconds, so I really wonder how the driver placed the connection. And like a couple of kids excited to see an elephant for the first time, they were pointing at the Jag and BMW on the road.

The way back was equally interesting. The journey took me back a decade and a half - 12B - Luz to Liberty. Those were the days when eve teasing was at its worst. My friend and I used to board the 12B (which was perennially crowded) and have been blatant victims of breast crushing, butt pinching, crotch rubbing and what not. It was only natural that I had my own apprehensions after all these years, considering that I was going to board a bus during the peak hour. One 21G arrived and I decided to give it a miss after seeing the crowd (the bus was not even half full). A second one arrived, a semi deluxe bus, a lot less crowded and I managed to get in. I stood most of the way, wary of my fellow passengers especially men who were walking up and down the aisle. Surprisingly, the ride was uneventful and I reached home in one piece. The money-ticket passing activity was still on. Most men had their headphones on or were busy whatsapping / facebooking and the others were just looking out the window. Some of them even said "excuse me" when they wanted to move across. I could only smile at how some things never change and how some things changed for the better.

And, that's my bus ticket for today :) Prized possession? May be! 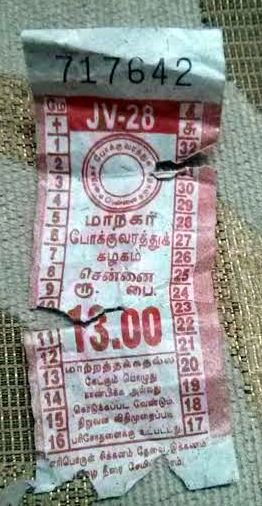